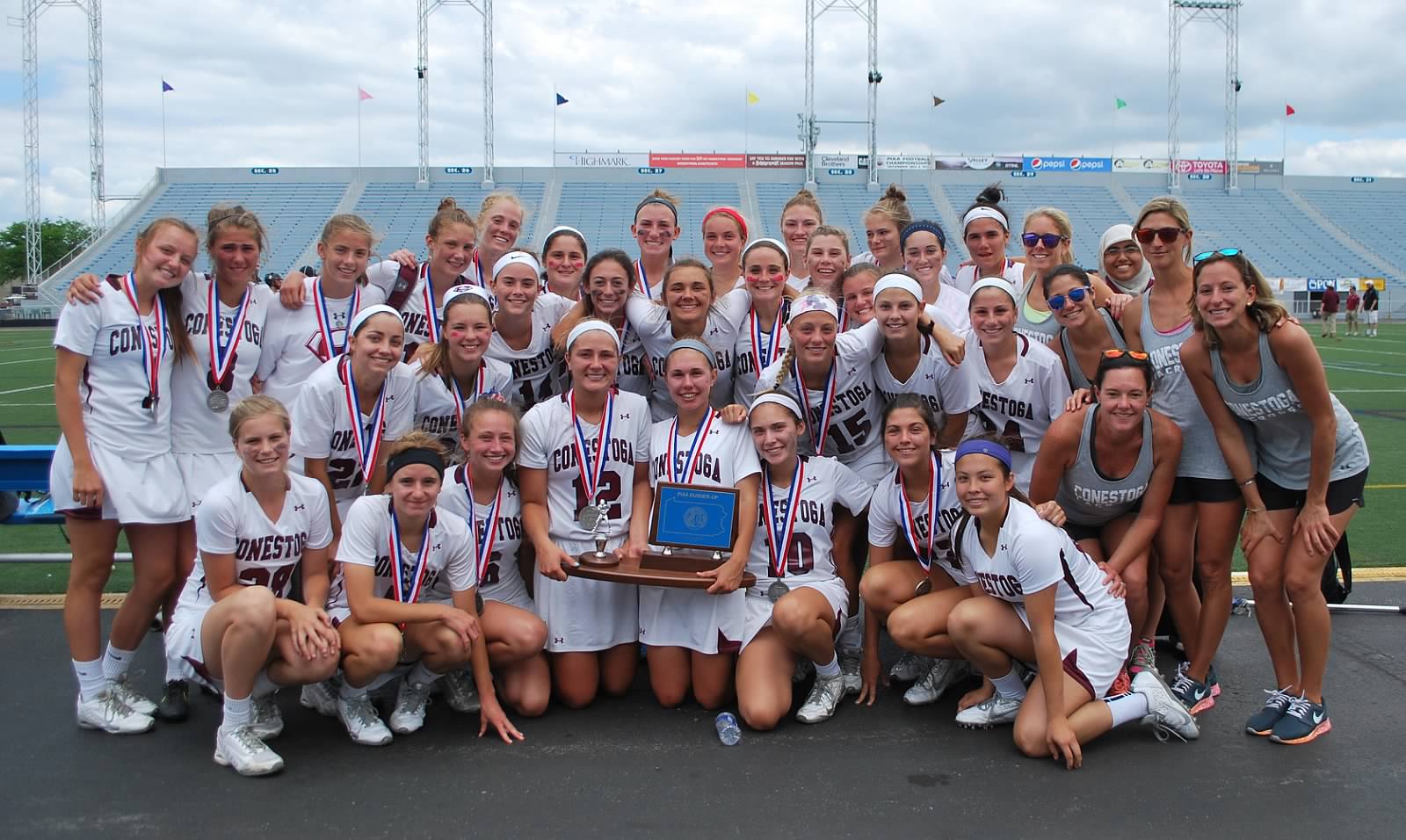 Agnes Irwin (3/23): We had really tough opening game to Agnes Irwin. On the defensive end, Goalie Laney Stenson had 8 saves. Maggie Hanzsche had 4 loose balls and Maddi Little did a fantastic job on Agnes Irwin’s best player. Midfielder Liz Scott led the team in draw controls with 4. On the offensive end, Maggie Stetson had 3 goals and Monica Borzillo had 2. I was very proud of our girls for not giving up the entire game, that showed great character!
Lower Merion (3/24): The V team had their first victory of the season today defeating LM. Sondra Dickey was outstanding on the draw with 6 draw controls, 3 goals and 1 assist. On the offensive end, Moncia Borzillo had 3 goals and 2 assists. Amelia Kienzle scored her first career goal, congratulations!!! Even though the defense didn’t see much action, they did a great job holding LM to 2 goals. Goalie Jules Horning had 4 saves. Liz Scott led the team in caused turnovers with 3, while Maggie Stetson had 2. What a great way to bounce back from a tough loss. On to Springfield!
Vero Beach, FL (3/30): We had a fantastic win against Vero Beach while we were in Florida. It was a total team effort all over the field. We held on the defensive end and capitalized on their 2 yellow cards and scored 4 goals in less then 2 minutes. Scottie Growney was our GGG with 1 goal, 3 assists and 3 draw controls. Defensively, Maggie Stetson caused 2 turnovers, had 1 goal and 2 assists. It was a great win over the 9 time state champs of Florida!
Harriton (4/7): Wow! What a great game we had against Harriton! We had not beaten them in the regular season for a very long time. Once again, this was a total team effort! Defensively, Jules Horning had 3 major saves in a row which led to a 10 minute scoring drought for Harriton. Maddie Little and Elisabeth Ingersoll were both forces on the defensive end. E had 2 caused turnovers. Liz Scott was our GGG for the game! She had 3 goals, 1 assist and an amazing 6 draw controls! She was a force on the field. Monica Borzillo also had an amazing game with 5 goals, 4 assists and 3 caused turnovers! I couldn’t be more proud of the teamwork that I am witnessing on the field.

Notre Dame (3/12): W 12-4 – JVA had their first competition! We had a scrimmage against Notre Dame. Anne had an awesome game in goal, shutting them out in the first half and allowing only 4 goals in the second half. All of the girls did a great job playing together for the first time. The game showed the potential our team has and I am so excited for our next game on Friday against Bishop Shanahan. Go Stoga!!!
Agnes Irwin (3/21): JVA had a close win vs Agnes Irwin on Monday for our first game. We won 7-5. Anne had a huge game coming up with 8 saves and keeping us on the winning end. Dana had a great game on the circle, getting 3 draw controls. Scoring for Stoga included Natalie, Katie S, Ilana, Amelia, Dana, and Grace M (2). Go Stoga!
Lower Merion (3/24): Stoga overpowered Lower Merion today 15-3. We had nine different players score and five different players get assists. We achieved our team goal of 5 caused turnovers in the defensive end. Way to go Defense!! Morgan had a great game at the draw getting 4 draw controls. Scoring for Stoga included Tessa, Dana, Morgan, Maddie W, Ilana, Grace M (2), Katie (2), Lindsay C (3), and Grace E (3). Assists by Meredith, Tessa, Maddie W, Dana, and Ilana (2). Great team win JVA!
Harriton (4/7): JVA had a great win against Harriton on Tuesday. After being tied 2-2 at half, our team really turned on their game to pull away from Harriton and win 8-4 in tough weather! Lexi (GGG) had a great game at defense, coming up with pivotal ground balls and interceptions! Tessa also had a great game with three assists and one goal. Scoring for Stoga included Grace M, Dana, Lindsay C, Tessa, Grace E, Lindsay E, and Morgan (2). On to Radnor Thursday! Go Stoga!!
Radnor (4/9): Stoga won a close game against Radnor on Thursday! Meredith Ross scored in the last minute of the game to put us ahead 6-5 for win. Last year, Radnor was our only tie, so it was nice beating them this year! Meredith (GGG) had a great game all over the field, causing two turnovers, scoring two goals and getting two draw controls. Lindsey E had a great game on D, causing three huge turnovers. Grace M, Dana, Grace E, and Amelia also scored for Stoga. Great win Stoga!
Marple Newtown (4/14): Stoga had an awesome team win today. We accomplished all three of our team goals: we were able to score off of three different plays, get more than 6 caused turnovers, and we were over 60% on the draw. We won 15 of the 19 draws. We also had 10 different people score. We had ten different players score, including first goals of the year for Courtney and Sara! Dana did an awesome job on attack with 4 goals. Meredith did a great job at the draw, coming up with 5 draw controls. Defense did a great job of keeping the ball on the attacking end by causing Marple Newtown to turnover the ball 11 times. Lindsay E led the defense with 3 caused turnovers and was our GGG. Scoring for Stoga included Grace M, Ilana, Lindsay C, Sara F, Tessa, Courtney, Maddie W, Grace E (2), Meredith (3), and Dana (4). GO STOGA!!
Strath Haven (4/16): Stoga had an awesome win against Strath Haven last night. After having a tight half time score of 4-3, we went on a 10-1 goal run and won 14-4. Dana had a great game and was our GGG, scoring 4 goals and coming up with 1 draw control. We had an awesome game at the draw, getting 12 out of 19 draw controls. Meredith and Morgan led on the circle, Meredith getting 5 draws and Morgan getting 4. Our defense had an amazing game, causing 10 turnovers. Way to go STOGA!!!
Great Valley (4/18): Stoga had an awesome win against Great Valley!! Stoga won 8-3. Our defense played very well, holding Great Valley to only 3 goals and only a few more shots. Stoga dominated the draw getting 10 of the 13 draw controls, giving us the chance to possess the ball on attack. Everyone helped out at the draw. We had 7 different people get at least one draw. Helping at the draw included Ilana, Dana, Meredith, Lindsay E, Maggie (2), Ceara (2) Morgan (2). Great team win Stoga!!
Manheim Township (4/20): Stoga had a great team win against Manheim. We had 6 different players score for 8 goals!! We did a great job of working together to get each other an open shot. Defense had a wonderful game causing 6 turnovers on the defensive end. Maddie Wood (GGG) led the defense coming up with 3 caused turnovers. Lindsay C had a great game on attack getting 3 goals and 1 assist. Scoring for Stoga included Natalie, Grace E, Meredith, Maggie G, Emma, and Lindsay C (3). Keep up the teamwork Stoga!
Haverford (4/21): Stoga is on a roll!! We won another great game against Haverford. Stoga won 12-3!! Anne did an amazing job in cage and was our GGG! She had 6 saves in the second half alone, and really secured our win!! Stoga achieved our team goal of over 70% of draw controls, getting 12 out of the 17 draws. Morgan and Burns had great games at the draw winning 4 each. Scoring for Stoga included Morgan, Meredith, Burns, Katie S, Grace M, Tessa (2), Dana (2), and Grace E (3). Way to go Stoga! Let’s keep the winning streak going and beat Ridley!